A campaign group has successfully raised enough funds to pursue a judicial review against East West Rail should a route through Bassingbourn or neighbouring villages be approved.

Five route options for the central section of the East West Rail scheme, which is proposed to run from Oxford to Cambridge, have been published. 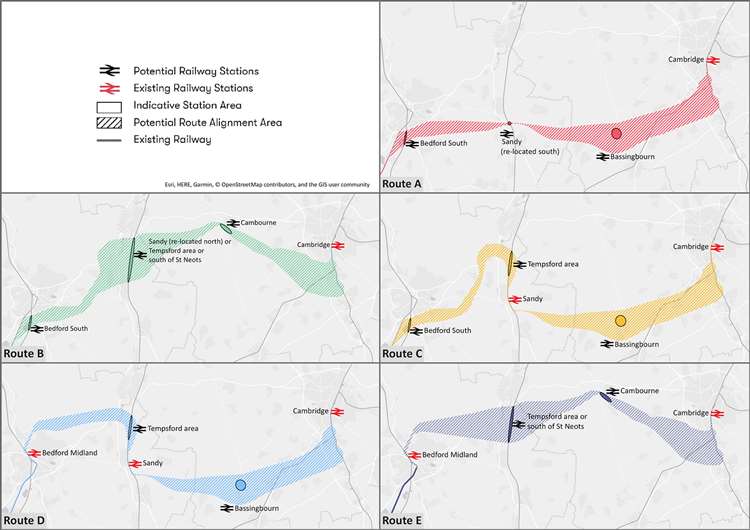 Of the five routes, four link to the existing station at Sandy. Three routes connect with Bassingbourn to the south-west of Cambridge, with the remaining two linking to Cambourne.

Concerns have been raised about the scheme’s environmental impact, with routes passing close to the RSPB The Lodge in Sandy, the National Trust’s Wimpole Hall, listed buildings and scheduled monuments.

Fill out this form to receive updates, newsletters and invitations to seminars and events relating to the East West Corridor. We will never give your details to any third parties and you can unsubscribe from our communications at any time by clicking the “unsubscribe” link at the bottom of email communications. Your personal data will be processed in accordance with Howes Percival LLP’s privacy policy, which can be found here.

Fields marked with an * are required.


We know you're busy. But you still want to be informed with all things relating to the East West Growth Corridor. Sign up to get the latest news, reports, and thought leadership from our East West Corridor Team delivered directly to your inbox.

Howes Percival LLP is a limited liability partnership registered in England and Wales with registered number OC 322781 and is authorised and regulated by the Solicitors Regulation Authority. A list of members’ names is open to inspection at our registered office: Nene House, 4 Rushmills, Northampton NN4 7YB. © Howes Percival LLP

The information about legal matters is provided as a general guide only and should not be relied upon or construed as constituting legal advice and Howes Percival LLP disclaims liability in relation to its use. You should seek appropriate legal advice before taking or refraining from taking any action.